Such a simple to count their age if both of them were born in the same date 🙂 But that is how it should I guess. Although I am still thinking about the third one, but let see, what the future will tell and also my body will accept.

So lets go to the point, how my guys, your little friends and grandsons are growing an improving. 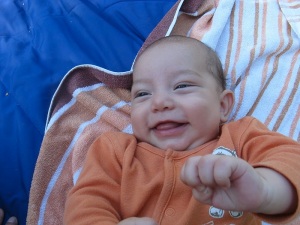 his last weight was 5,8Kg and he had 61 cm while having check up in 2nd month, so I guess since he is more heavy now and he is wearing clothes with the labels for 3-6 month and they seems to be small that he grown too as well. I went with him to doctor and he had 6,7 Kg and 62 cm.

Carlito already went with me to many business mtgs, so I guess that I will grown from him some sales man. Since he attended many sales mtgs 🙂 but that is faaaar faaaaar future 🙂

And in general I could see that he is very resistent against Edies love attacks. Edie loves his brother very much, so sometimes he rolls over him, he kisses him nearly to his death and tries to play different death games with him.  But in general he used to call me when Carlito is crying. He tries to take care of him and if we are together he tries to play with him too 🙂 they are simple cute and creates nice folk.

His biggest success for this month was that he learned finally not to wear diapers and started to tell us for pee and pooh:)

During the time he is growing into the draculito man as we call him. He is very but very active and I think he is missing kinder. he needs to be walked outside for few hours per day or he is able to destroy house. but that is natural i guess.

He is very in love with all kids and also Carlito. he takes care of him and also wants lots of attention from me. Especially mornings are ours. When rest of the house is sleeping and he used to wake me up around 6 or 7am we go to have breakfast together and have caressing and hugging time. After I have to spend lots of time with Carlito.

He likes other kids a lot and whenever we are he loves to play with them. He loves sand yards and lego. His favourite toys are bagres and bulldozers. While seeing them on the street he is able to get lost. He forgets the world and he is able to be watching them for long time.

Edie loves to be taking things out of the shelfs and he does the mess around but he understands very well if he needs to clean its mess.   There is just sometimes fight to do it.

He has many days moaning time. If he wakes up with his bottom first, then his hard to turn his mood, but can be managed too. by constant action. I let him cook with me, to clean, wash dishes, go fir shopping etc. I just need to make him bussy.

Edie has lot of fun with talking like “deda kakadak” – grandfather truck, kocicka, mysicka, he started to say colors and trying to mix czech and spanish. It is fun.

Edie is still very active, now even more and more. I’m spending with him lot of time outside just to spend his energy.

He is very much momy boy again. He wants me to do everything for him and he loves to be caressed and cared in general.

And now better than any words are better videos: