Home › Parenting › How we made Edie sleep the whole night

How we made Edie sleep the whole night

old. And the question about his sleeping habit started to be on place because I refused to keep breastfeeding him at night became it was not helping him to be calm and sleeping. I would even say that it was contradictiv to our goal to make him sleep nicely whole night. Edie had 10 month and week and we realized that already some time he is only crying to get attention from me, that he is only chewing and not drinking much and that if he is with his grandma or aunt he is able to sleep nicely. He used to wake up about 5 times at night but they were able to caress him slowly and put him back to bed without bigger noise. But in my case he felt me and was always crying when I tried to put him to his bed. So we simply found out that he is already in the age, when he is just becoming spoiled or that particular pattern has been created. “I cry and I am carried or attended by my parents” and this habit could keep going for ages. So once I said STOP. NO MORE thanks. I would love to have after 10 month of broken nights some rest. My eye backs are not big but my energy start to be low! :)Edie is also not sleeping well and he is tired during the day and more moody, so it is not only my selfish with to sleep well but also it will be good for him.

So back a bit in time. There are two main streams of dealing with kids and unlearning them some particular habit (sleeping problems). In our case constant carriage at night and night breastfeeding. One is from Dr. Sears (” strategy do not let your baby cry, attend him as much as possible”) the other is Dr. Ferber (” strategy to let baby cry for certain period to break his stereotype). So when Edie was about 5 month old and he reached 5 Kg weight we knew that it is time to try Ferber strategy, we tried to make him used to be on his own and fall a sleep on his own. But whole try ended up after one week when he nearly lost his voice and the worst was that he lost his mile and most of the social communication. We said NO. This is not the right time for him to be on his own. He is toooo little and does not understand yet. He need mom!

But now there were already different circumstances, we tried the strategy of Dr. Sears and were attending Edie when he started to cry. I was already not feeding him at night because he was not needing it, but I was carrying him always when he woke up and started to cry. But uppppps!  He was waking up more and more often and he did not let me to put him to his bed. He always started to have very hysteric cry, so well I carried him over and over again. Sometimes even one hour and more and he could not sleep properly. So Sears in this case did not work for us. 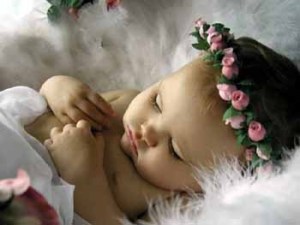 So as I wrote we said NO MORE!. This can not be like this. Look at him his cry is just so mean. He is only looking for attention. He is not missing anything and he is ok. So we decided to try Ferber strategy. LET HIM CRY! Easy to say but worst to do. We stayed in bed next to Eides crib. And we were sleeping. Then suddenly he woke up and started to cry. But badly, like if you are killing somebody!  We hold our hands, we did not move, we did not spoke with Carlos and were just thinking that this will once be over and that we are doing it for his good. So yeah after cca 20 min the terrible scream was over. He woke up that night 2 more times, but already did not cry that much. In the morning he woke up with smile at 6am. I took him to our bed and breastfed him. He lived very nice and active day. The second night we did same. We put him to the bed after dinner and bath around 8 pm. No Carriage allowed. And in this case he had one of his crying wake ups alone in our room. But in this case it was already shorter, just about 5-10 min and his cry was not that desperate like before. I know that I can not attend him by going there and touching him otherwise he will expect me to carry him and will cry and wake up. So I let him be on his own. He fall asleep. He was though sensitive when we entered around 11 pm our room and woke up. But we went silently to the bed and did not carry him. After this night he had again nice and active day. The third night was already easy. His new stereotype started to be created. The dinner at 7pm, ,after nice worm bath, I breasfed him and after put into his crib. He was already sleeping calmly and deeply. He woke up only once for about 5 min, he moan a bit and fall asleep again. He woke up at 5:30 am hungry, so I took him to bed and fed him.

And now already after one week. He got used to it, easily. Now I gave him dinner, after bath and around 8 – 8:30 pm he is already sleeping in his bed. He sometimes wake up but just for short time and then he is nicely sleeping whole night till morning. He has happy and active day. He is smiling, communicating and is visible that his psychic is not harmed.

The mission was done.

Good advice to you: You know there are many theories about parenting. But nobody is having your child. The others have their child. And your is unique, Your child is yours so it is only up to you which way you will choose. Because the way will be the best one for your child. You as mom are the only person who knows your child the best. So follow your instinct and you will not do mistake! And do not forget your child needs to cry sometimes to be able to develop his vocals and lungs properly!

2 comments on “How we made Edie sleep the whole night”